Pieces exploring the past

Shelter from the storm by Mary Pickin

I remember I was born in bright electric light; at night; in winter. I love white neon lights and the blue light of mornings. I fear the yellow of summer afternoons and evenings and the arrow slits left in curtains that aren’t properly closed on a summer night.

This fearful child was scared of creatures and fairyfolk behind the night time summer curtains, like (the so called) Fairy Kind Heart and the great big fat saddleback pig stuck to my window. I feared the gardener who turned into a leopard and the masked knight whose face peered through the arrow slit. I was frightened to death and longed for a reassuring cuddle.

Sixty years on I’ve been eight years alone, by the sea; grey slate, swishing, cold foggy waves in the winter gloom; squawking gulls and the occasional rat scuttling by my bench which is half way down to the bay. This is my refuge when I’m fearful and anxious and longingly sad. Warm and cuddled in parker, scarf and woolly hat staring out at the buoys floating, the freezing swimmers and the moored container ships stark on the horizon.

On Monday’s bench I’m uplifted by my mad friend; we talk of angels and archangels and journeys to nirvana; an adventure and escape, forgetting the messy untidy loneliness of lockdown. The afternoon darkens, the full moon comes up and the dogs on the beach dance in their illuminated, twinkling collars.

Now I can more than cope. I can fly.

Taking a train to the end of Empire by Hannah Humphries

I remember how, as a little girl in the 50’s, we went as a family from Preston to Manchester to visit the elderly aunts of my mother. I was recalling this with a friend yesterday , who had the same experience of having to sit very still in formal rooms, to be “seen and not heard”, though occasionally allowed to play decorously with a doll , or another suitable female oriented toy! Not sure if my brother just had to sit or as a boy was allowed more licence.

These visits were, to my young mind, always to dark terraced houses, but now I recall one that was to a different “posher” house, where “Aunty Averil and Uncle Dan” lived. There was the whiff of difference that attached to them, which fascinated me. I have a feeling Dan was Mum’s cousin, not her uncle, but there is no-one left to inform me.

The kindest person from that generation was Mum’s Dad, my grandpa, who, having been a teacher, always welcomed us and showed us the books and toys he had kept for us. The house was very light, not dark as they had moved to a bungalow by the coast on his retirement.

This was the grandpa who “Showed us the stars”, as I wrote in a poem once.

I Remember by Paul

It was a warm summer morning and the air was still, with the strong smell of beached celp. Golden sand, soft underfoot and not one person in sight as far as the eye could see. The tyde was on the tern, filling the lagoon with fresh sea water feeding the esturey with new life. I setup the canvas paint and my trusty painting stool. The air was full of sound, Sand-pipers chacing the waves, in its retreat and then about face and racing infrunt of the progressing wave as if to play a game of chicken with the forses of nature. I setteld down to start my work.The light was perfect as I painted the landscape befor me. However I am ocationaly distracted and on this ocastion I whitnest a lumbering hulk, dark brown in couler with an ell held firmly in its razer sharp jaws, he stoped and looked at me for a moment or two and then just climed up on to a small grassy hillock he looked at me once more and then started to devoure the strugling ell after his meel he sliped gently in to the water and moments later reternd with another unfortunat ell, he just glansed at me this time climed up on to the small hillock. He watched me as he finished the ell and gave himself a good shake and curled up in the warmth of the sun, he burpt lowdley and the smell was horrid ( fish guts ). As he setteld down for his nap he opend one eye looked at me and then whent to sleep. He sleped for an hour or two and I carred on with my work and now the light had changed, it was time for my lunch, whileL i was packing up the Otter looked at me once more and slipped into the water. This was my first encounter with the Otter I would name later as “Old Tom” however it was the last time iever set eyes upon him as the next day we left early in the morning to continue our gerrney north folowing the west cost of Scotland.

I remember my mother holding my hand at the edge of the railway track as a colossal, dragon-like, steam train passed us by.

I was almost four years old at the time, my mother had packed sandwiches and we had walked from the house along the ‘black path’ to the railway track.

I can remember exactly what we wore that day, and feel the pull of gravity from the enormous train. As it passed I saw the whole journey of life go by.

That was the first part of our adventure that day – a trip to the seaside – days like that happened very rarely.

It was on the plane that I cried. My sister had dropped me off for the flight and I was ready to go home , but I wish I could have stayed longer. It had been a couple of days away down in Sussex, seeing all my sisters and visiting my Dad, but now the trip was over and I’d been the first to leave , but then again I was flying home the others were local , or driving home and so could stay longer.

Dad hadn’t been well for a little while and eventually we heard he had brain tumours. They were inoperable and so time was running short. Visiting that weekend I had hoped to have a conversation but it depended on someone giving me a lift to see Dad and my step mother.

I won’t forget the smell of the rose at the front door as we awaited entry to the bungalow. It was a pink Gertrude Jeckyl rose, with a fragrant scent. Dad was asleep in a hospital bed in the living room , so we clustered in the kitchen for a cuppa. The nation’s excuse for a pick me up. Time passed and eventually Dad awoke and I had a chance to have a conversation, our last conversation.

We asked each other how we were and Dad said he was more than ready to go and had said so to my step mother the other evening. He had said Good night and goodbye Pam. To which she had remonstrated it was not goodbye. So here he was, telling me that he was holding on until she was ready.

Looking back at the afternoon , I realise that some folk need time to adjust to what is happening and Dad was giving her that time. Some who know they are dying hold on for the birth of the grandchild, or the arrival of the brother from Australia , whose. Flown in to say his goodbyes.

Then the dying quietly die.

Sitting on the plane I realised there was so much left unsaid. I had thanked Dad for being my Dad and being there for me as a child. I’d thanked him for his love and generosity . We had talked about death and whether there was a heaven and I kissed him goodbye.

Sitting on the plane I just let the tears flow and several days later I heard he had died in his sleep.

A Conversation I Wish I’d Had by Tony Huzzard 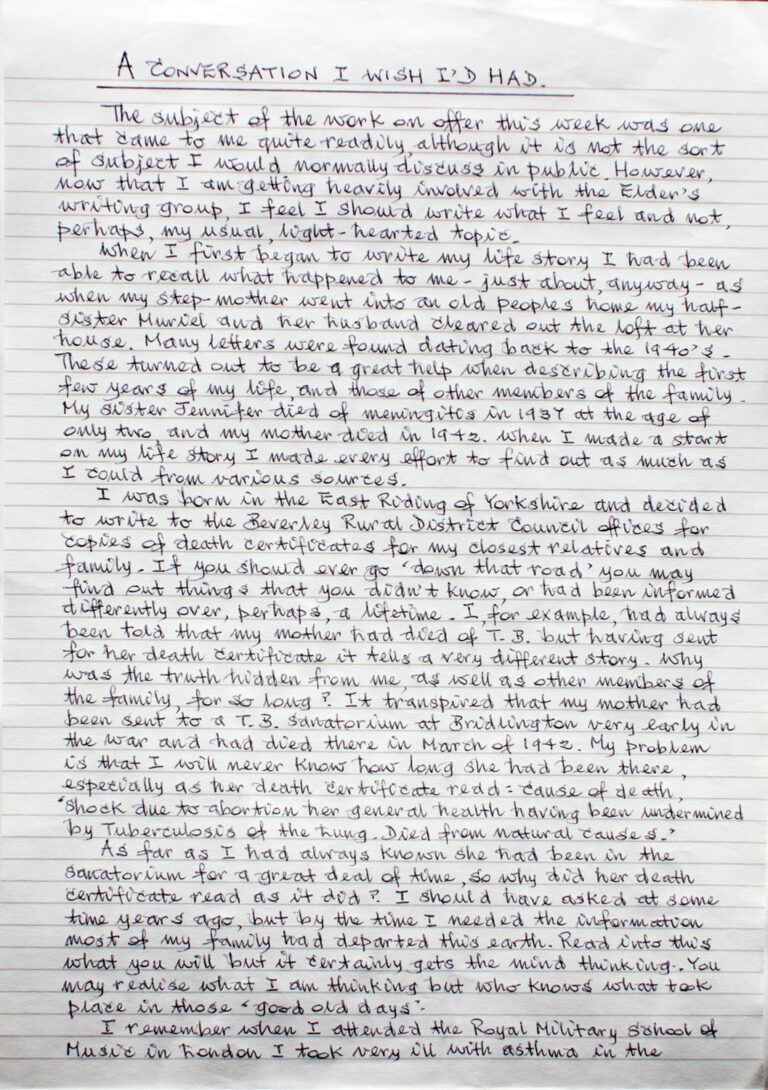 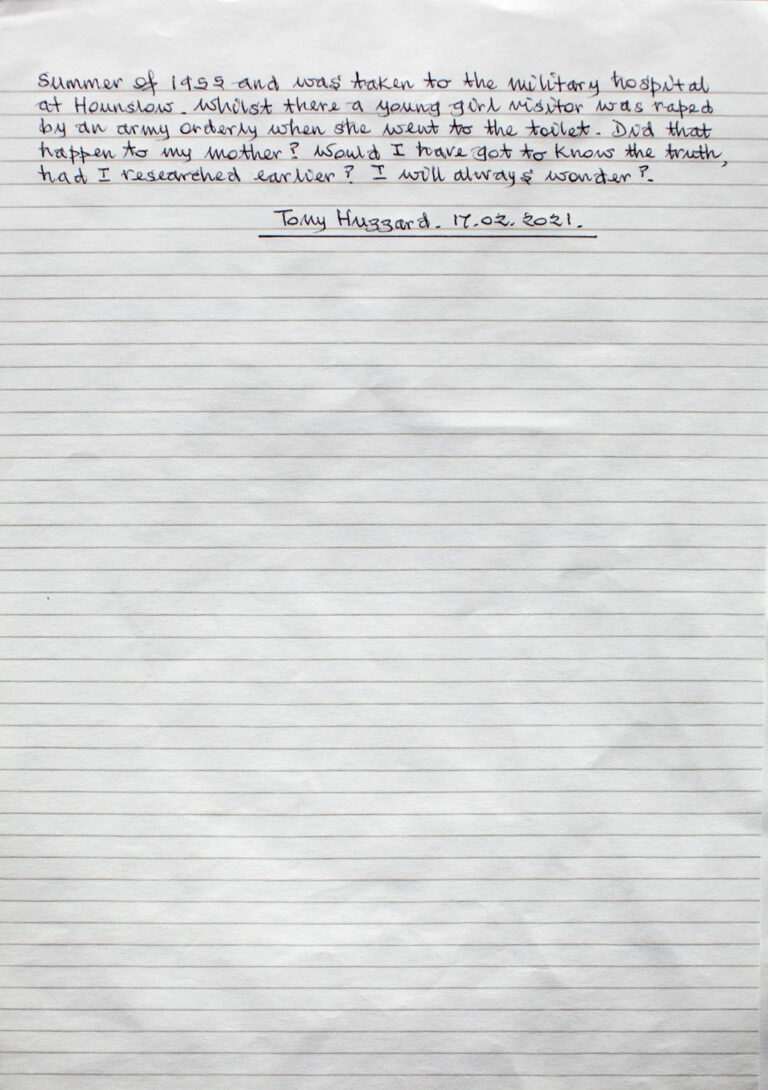